So as I'm spending timing thinking about how to do characters for my next side foray into 1st edition AD&D (motto: needless complexity can be yours!), there is a well-timed bit of warped Catholic theology about rolled-but-unused characters: 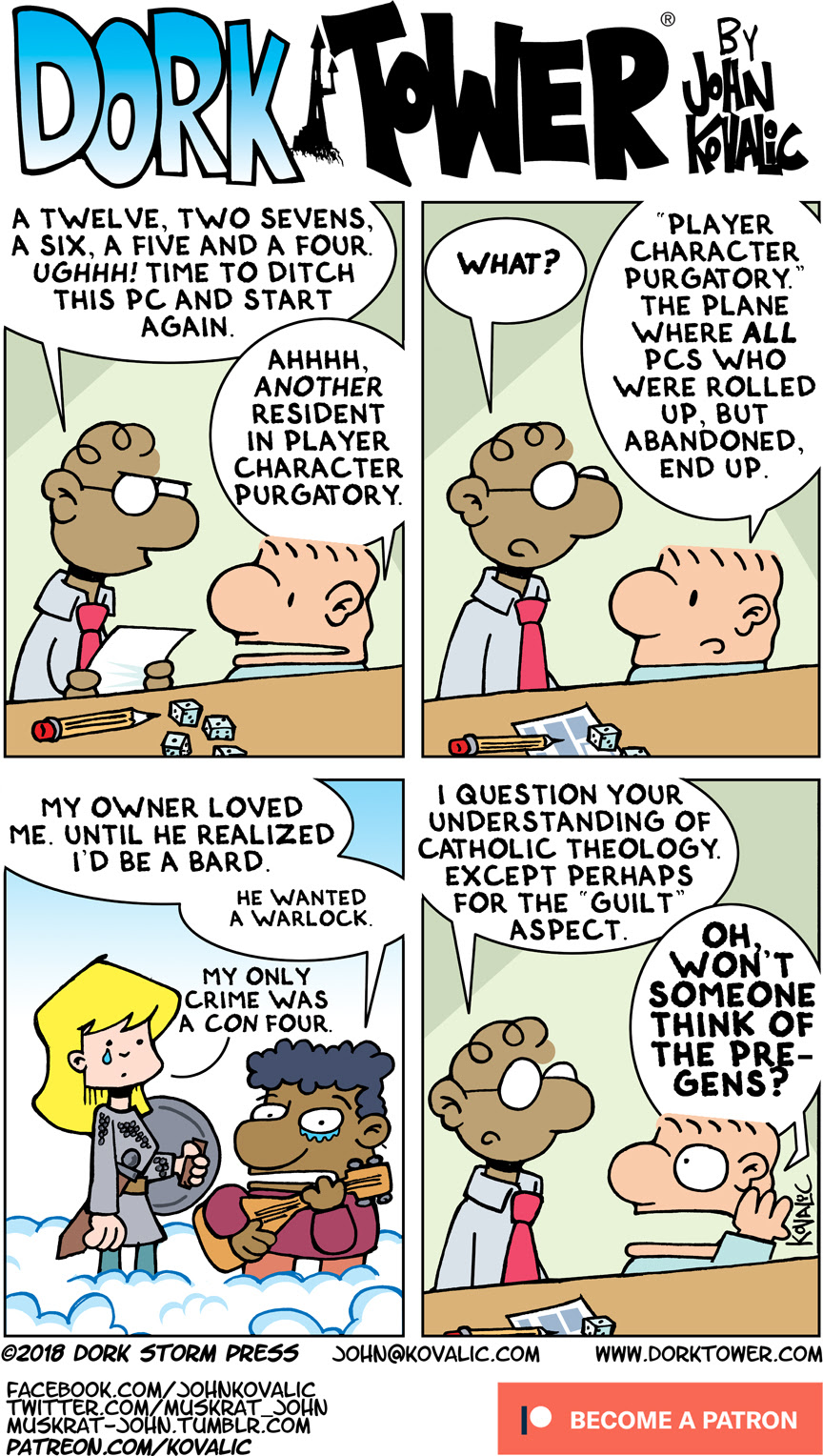 
So how are we going to do the characters for C2?

I had some thoughts:

The module comes with pregens . . . but only five. It has a whole story woven into those five, too, but the story drops away as soon as you enter the dungeon. That's not a big worry. I do need more than five, though.

I thought of using other pregens. The A-series has good characters - and nine of them - but they're short a bit on levels. I may save them for when/if I get to run A3 and then A4, which I think would also be a fun side game. The ones in S4 are too high level, the ones in I1 are a bit iffy in terms of power distribution. No one wants to be a 3rd level C/M-U with 9 hp.

We could do that, using the experience of WPM and Appendix P, and probably go with the roll-six-sets-of-4d-drop-lowest and use Appendix C to give them magic items.

I'd be tempted to use the "buy your equipment" magic item list in C2, but that will take at least an hour of discussion, and endless minutes of "Who has the Sword +3?" followed by "No, remember, we decided to get a Sword +2 instead, and use the extra money on a Potion of Flying." "Who has that?" "It got broken, remember?" Aargh. At least if I hand it out, it's just out there.

So I am leaning toward the roll up six sets and equip from Appendix C.

What level? Depends on a few things.

If the module is scaled for five guys around level 7 or so, then eight-ten players with level 7 or so PCs means the module isn't going to give them as much of a challenge. But if I lower them down too much, they'll lose out on higher-level spells which can be critical to dealing with some situations. Potentially. I am not cleverly giving stuff away here, or cleverly avoiding doing so. I haven't re-read the module in enough depth to do that. I'm just saying, if they expect you'll have level 4 spells and you don't, that could be an issue.

The old AD&D pregren thing of mixed-level groups is nice, but who wants to be the lower-level guy? If I let someone be M-U 7 but the second M-U is only 5, that's probably fair to the module but not so fun for the level 5 guy. We'll do that in Barrier Peaks (we'll use those pregens) but not here.

Also, I need to know how many players, so I can distribute XP accordingly. We're so far out we don't know. I'll have to pick a date soon, so we can get on this.
Posted by Peter D at 11:10 AM