So I won WWI. Or at least a campaign: 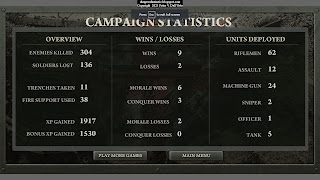 This game was a lot of fun, except for a late bug. After both sides got poison gas, we both deployed gas against the initial deployment area of enemy forces. It was persistant - so persistant that it never went away. The gas clouds did, but any forces except for - eventually - tanks - died instantly upon entering the battlefield. I won the last three battles waiting out enemy deaths until their morale broke, and/or deploying my tanks and fire support against their tanks and winning. That's it. It wasn't even worth deploying infantry as they just died.