This is one of those adventures I truly love. Not like, love - Lawrence Shick's S2 White Plume Mountain. 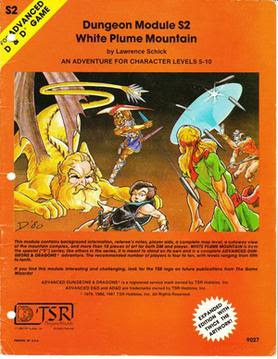 I have two copies - a very ratty copy I got when I was really young, missing the tear-off handout sheet. I also have a copy I got when I lucked into the Silver Anniversary Boxed Set on sale. My original is full of awesome Jeff Dee artwork, as well as stuff by DCS and Erol Otus. The facsimile of the B&W version lacks the Jeff Dee pieces, more's the pity, but it's complete. Unlike my well-worn copy.

I'm trying to keep clear spoilers out of this review, because I'd really like to run it for my players someday - either converted to GURPS or straight-up using some facsimile of AD&D. So if you could avoid blatant spoilers in the comments, that would be very cool.

There are at least 5 nasty set-piece battles on interesting battlefields and a number of mixed puzzle-fight situations. Some puzzles can aid you, others harm you. That's the funhouse. The quest is, go recover three magic weapons from the dungeon for some rich folks. Why not keep the weapons? Well, they all come with some very significant downsides - enough that most players would probably cheerfully hand them over for a promised reward instead of having to tough it out wielding them.

I especially love that some puzzles have a clear and early solution, and others are really tricky. Still more are basically no-way-out types, where you must get out of your comfort zone (or your armor, or your ranked marching order) to get by them. Some are easily solved through powerful magic and others magic won't help with a bit. Many are combined with external dangers.


I love the details - the flooded dungeon parts, the details on the doors and walls and floors that aided play. I loved the entry point to the dungeon - through a vent in the smoking volcano between bursts of hot steam and inrushing air. Lawrence Shick does a good job giving a DM enough information that you can see the intent behind the puzzles and to react to clever solutions. Not only that, but there is little enough you'd need to guess at. No "What the hell did the writer think here?" bits or "Okay, but how does this work?" bits - you get clear guidance on breaking things, jumping things, and "what if I just do X?" solutions.

For those who like non-linear dungeons, there are some non-linear bits - sections that don't inevitably lead to one of the quest objects, and either act to distract or fill out the dungeon. A poem helps identify which is why, if you can puzzle it out.

Even the truly weird parts - guys in dead-end rooms with no way out, that kind of stuff - is easily explained since the adventure only covers a single level of a complex actively maintained by someone with access to powerful magic. I also like the idea of a wizard issuing a challenge - you want your dangerous magic items you took from me back? Come and get them.


I think this is one of those adventures people either love or hate. Love, because it's so tight (it's 12 pages original, 16 with the extra art) and challenging. Hate, because it's so tiny and funhouse-y (who puts that in their dungeon? Why do this?) and not a "realistic" dungeon. For me, it's love - the flavor, the challenging monsters paired with problems only a thoughful party can solve. It's like S1 Tomb of Horrors except less "death with no Saving Throw" and more monsters.

I must have run it at least twice - only once with a group getting any distance into the dungeon. The other, like the band I was in that play it, died or fled quickly. I know my half-elf fighter/magic-user I ran in what became a one-shot running of it by my cousin get level drained by a wandering monster and we lost like half the party. Being the stalwart elementary school kids we were, we simply played something else instead of continuing on. Lunchtime-only campaigns were like that in the "good old days."

Back in 1999, for the Silver Anniversary of D&D, TSR did a series of "Return" adventures. Loving WPM, I picked up Return to White Plume Mountain. I picked it up at "Days of Knights" down in Newark Delaware while I was down there working in (Old) New Castle. I even reviewed it for Pyramid magazine. I won't go deeply into it here, but that module did a pretty good job. It posited a partly-sacked White Plume Mountain, mapped some of the areas hinted at but purposely left off-map in the original adventure, and set a conflict within it. It also put in a fourth magic weapon that didn't quite fit, but that's neither here nor there. I stole elements from that adventure for my last campaign, because some of it was so clever. The long and short of it was, if you'd played WPM back in the day and then re-ran your old buddies through "Return," they'd have enjoyed the mix of new and old. It was enough nostalgia plus sufficient new challenges to spark the interest of players who'd long, long ago ran their favorite guy through S2.