Before I even get into this, I know Gary Gygax has talked about how he would have done this differently. But he didn't. The introduction covers this - his original idea was really close to T1-4's special feature, and DCS came along with an idea Gary Gygax really liked . . .
I'm glad it came out the way it did, because it's a fun and cool adventure.

This is spoiler-filled, too.

Q1 Queen of the Demonweb Pits 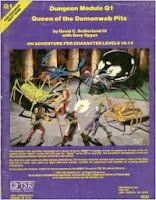 It takes place in the Abyss, with no way back to where you came from and a curse built into the only mechanism for going forward.

Most of the big cure spells don't work so well in the Abyss, or mess with you instead of helping you. Contacting other planes for knowledge will fail, at best. Spells to warp the environment to your ends will fail, because a demon-goddess has warped them to her ends. Clerics can't get back high-level spells (or even mid-level spells). The monsters can see further than you can, and sense other levels of the demonweb and use that against you. Oh, and many magic items flat out don't work or become much less powerful.

Up against that, the enemies are tough. Not all demonic, although many are. The ones that aren't come in packs large enough to give you serious pause once you realize your resources are being drained and not easily recovered. You basically trek across a multi-level "web" of hallways with magical doors in them. Behind one on each level is the (easiest) way to the next level; behind the others are encounters.

I suspect a lot of people might see this as pure adversarial GMing, and probably as bad design. To me, though, it's part of what makes the adventure fair but hard. It's not "you fall down a pit you couldn't detect into a Sphere of Annihilation" but rather just a very hard but potentially richly rewarding adventure for high level folks. If you're 10-14th level in AD&D, you need something other than a big pile of HP to cut down and some platinum pieces to provide adventure. A warped environment built to a "T" to make non-Chaotic beings suffer with a target that uses everything it has to beat you down? That's high level adventure.

Each of the set-piece encounters is really neat, too. They generally take place on an interesting battlefield, with prepared monsters using their best abilities, and with plenty of chances for the PCs to shift the odds in their favor if they can figure out the weak points in the monsters' approach. These range from drow elves on a prepared battlefield with a load of effective spells to use to demons using illusions to make themselves effectively harder to defeat. Some feature the old "one of us is lying" gag with prisoners and guards. Most of the "hapless victims who need help" are tricks, but not all of them - and there are allies to be gained if you handle those situations right.

One level - the top level - contains gates to other worlds. This is where the adventure really takes off. Each world is special in some way, and is either being conquered by Lolth or provides her fodder for her armies. They are potential sources of allies or enemies, or just interesting encounters. One leads right to the elves from Three Hearts, Three Lions - something I didn't recognize until many years later when I finally read that book in High School, and recognized the elves! Still, I ran many memorable encounters with those elves with nothing but what DCS wrote.

At the far end is Lolth, in a spider-shaped ship made out of metal comprised of screaming souls. She has a whole series of prepared encounters and bolt-holes, so killing her takes repeated effort and forces you to fight on her terms over and over. Even then, she's not going to fight to the death unless you make her, so you can come this far and still fail to take her out. It's good stuff.

I know I ran this at least once through in elementary school. It ended, spectacularly, with the first real encounter with Lolth. I vaguely remember the fight going badly right from the start. But then my friend Jack had his elf wizard Hana jump onto Lolth and break his Staff of the Magi in a retributive strike. Booooom. She died, he plane shifted. Game over, everyone go back to Earth. Well, back to school - we played, and this happened, at lunchtime. I don't know that I ran it to its full potential - probably not. But equally I'd have run it as written, because I didn't change much in those days, either.