But I'm using a subset of the Technical Grappling rules, which don't use pin. 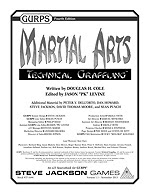 I struggled with how to deal with this. Douglas Cole had some suggestions, of course.

A few things I thought of included:

- automatically inflicts the maximum possible CP the monster is capable of with a standard grapple.

- inflict a multiple of CP every turn.

- inflict some capped amount of CP.

- inflicts one of the above, but only if a sufficient amount of CP are inflicted in the first place.

I found them dissatisfactory, in one way or another. Often, this severely nerfed the monster. Instead of "oh no, it's got me, I'm pinned!" it was "oh no, it's got me, in a few turns it might really have me, but no, I attack to break free." Some just went from lethal threats to minor threats.

Ultimately I went with something more simple:

Any "automatically pins" or "pins" attack generally works as written. Instead of "pin" effect the attacker inflicts the maximum CP for its Trained ST. A hold of 1 CP or more is sufficient to launch such an attack if it follows from a grapple.


I felt like that was the most fair to the monsters' intended offensive powers, and the most fair and loyal to the Technical Grappling CP-based rules. In many cases this won't be enough CP to pin a large or very strong opponent, but that's how it goes. In other cases this is so many CP an opponent won't be able even attempt anything, even with Extra Effort and Telegraphic All-Out Attack (Determined). This isn't a flaw - character fully engulfed by a purple worm or immersed in a jellied sphere of immobilization should be totally helpless if he's not a massive physical threat himself. Plus it neatly deals with "just how debilitating is that purple worm that's swallowed the giant's leg?"