Review: GURPS Conan and the Queen of the Black Coast

This is my third review of four looking at the GURPS Conan solo adventures. For the two previous ones done so far, see these posts:

For all of my reviews, please click the review tag or see the reviews page. 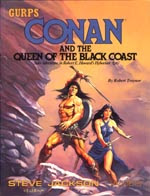 This GURPS solo adventure is based on the REH story Queen of the Black Coast. All you need to play is the adventure and the GURPS 3rd edition Basic Set. You don't need GURPS Conan, but it wouldn't hurt to be familiar with it, either.

This is a 270 entry solo adventure with three battle maps, four new monsters, and stats for Conan and Belit.

- there is a time limit. Or at least, time of day affects your options and affects play.

- there are Plot Words, which when garnered affect your options and your rolls going forward.

- the rules are almost entirely straight-up GURPS (but see Morale, below)

- You get to be Conan, or generate your own character.

- You get to earn character points at the end, and find out how Conan did in the story (not well, like in most of the more interesting Conan stories.)

There is a new mechanic in this solo adventure - Morale. You've got a loyal but superstitious crew, and they read omens and signs in your successes, failures, and encounters. This pushes a "Morale" rating up and down. It starts at zero. It doesn't really do that much, but if you get it too low, it'll sabotage your Leadership rolls and effectively take away some of your options. It's not something that would be easy to port to a different situation, though - too much is tied to the specific adventure and actions the Suba would approve of or be frightened by.

At this point, Conan is a 500-point character. He'd be more except he's got a pile of disadvantages. You also get stats for Belit (at 235 points), and a one-page roster of the other 88 members of the crew of Belit's Tigress. Like in the story, Belit is the captain, but Conan drives a lot of decisions . . . subject to his Sense of Duty (Belit) and Fanaticism (Love for Belit). Basically, if she says, "Come over here and kill this snake" you don't get to say no. But you, the reader, and Conan the character, get to drive most of the action.

Like in the story, the Tigress takes an upriver trip into a jungle to loot a lost city. The river has dangers to face, you can interact with the crew, there are dangers in the jungle and city, and there is plenty of loot. The loot ranges from tarnished coins up to a staggering amount of gemstones.

Just like in the story, if Belit is killed, it's quite possible she'll come back and help you from beyond the grave. You get a plot word you can use in any combat, once, and she'll turn up and help. It's a nice touch and well-executed.

This adventure shows off an interesting aspect of Conan adventures - Conan as leader of warriors. While you can pick up a companion and a small squad in Thunder River, here you have one companion and 88 warriors and leaders of the Suba. You can get those allies whittled away, too, if you aren't careful. And GURPS being GURPS and Conan adventures being dangerous, that can happen even if you are careful.

Just as a point of interest, this is the only one of the four Conan solo adventures not written by W.G. Armintrout - a prolific adventure writer for GURPS.

One thing I really like about this adventure is that you get a one-page check-off roster of the entire crew of the Tigress, so you can track all damage, losses, etc. on one sheet.

Looking back on my copy I can't tell how it went, because by 1989 I had access to a photocopier and the money to afford copies so I stopped writing directly in all of my books. I wouldn't normally keep post-adventure sheets or notes, either. Even so, I know I played this twice. Once I did really well, getting home with lots of loot. The second I deliberately angled for a more Conan-like ending and I got it - I made choices that I was pretty sure held more danger.

It's a good adventure. It's tight and interesting, and the foes are the right kind of scary - you can cut them down, but you cringe as the consequences of a blown defense or getting swarmed. I've used several of the monsters repeatedly in my own games - hell hyenas, the giant venomous constrictor snake (fantasy is like that), and the jungle lizard.

And just as an aside, reading Conan's description was interesting. "Belying his bulk, he moves like a hunting cat and is nearly as fast." The place where I do my training is full of professional athletes, just like I'm not. "Big strong guy means slow" is a real impression people have . . . but it's totally not true. It's a descriptive line that makes me think, "Yeah . . . no." Lots of muscle doesn't mean slow; you can be strong and slow but big, strong, and fast all on the same person isn't unusual. Like I said, an aside.
Posted by Peter D at 10:46 AM