First of three related reviews here - the second will be on Friday, the third should post on Saturday if I finish on time. I'm taking a look at three modules I don't see talked about much - M1 Blizzard Pass, M2 Maze of the Riddling Minotaur, and MV1 Midnight on Dagger Alley. All three are solo adventures meant to be played truly solo - one player, one character, no Dungeon Master. Today I'll start with David Cook's M1 Blizzard Pass.

Back in 1983 and 1984, TSR released several solo adventures. True solo adventures - no DM, one player, one PC, not "one on one with the DM." At least initially, you get some NPC help. This is the first of them that I know of. It was an "Invisible Ink Module" - you had to color in some parts of entries with an "invisible ink pen" to reveal what is there.

The adventure comes with a mix of normal text broken up into 309 numbered entries - you start at 1, and skip around as directed based on your choices. However, many of the choices are boxed text that is invisible until you color them in with the attached pen. No peeking ahead!

The module is set up for a single 1st to 3rd level thief PC. You're falsely accused of murder, and escape town by hiding in a fur caravan's sledge. Somewhere in Blizzard Pass you get discovered, but you all eventually get caught by monsters. So you get called by the name "murderer" for the adventure but have a chance to escape and save some of your fellow prisoners.

The game comes with pre-rolled character, but you can also make up your own. Interesting advice, too, if you make your own guy - "If the thief is first or second level, he should have a high constitution and more than the average number of hit points." It's a dangerous adventure, it says - and you can see how a low-HP guy is just betting no one makes any rolls against you before you get to the end. The example thief is level 1 but has Constitution 18 and 7 HP - the maximum! A number of wounds in the adventure are pretty small, but you don't have too many chances to avoid them. Not a lot of "Oops, the orc does 7 damage, make a new guy" in the damage results. More on that below. Even more amusing, it has advice for using your own character from your "regular game."

"5. If you are using a character from a regular game, be ready to accept that character's fate. It must be removed from the regular game if it is slain in this adventure!"

It further cautions you that you can take different characters through the adventure, but can't have the same character go through it multiple times to level up or get treasure. Heh. Awww. I didn't even think of that, but now I have. No "Blizzard Pass" runs, guys!

The per-rolled character is interesting, too - it has comments on your HP and stats, on your thief skills (it comes right out and says don't count on them working all the time due to their low level), and gear. The module is clearly written with a relative novice in mind - perhaps they got a lot of mail from would-be players with no one to play with.

Combat is a mix of you rolling and going to entries. Roll low initiative and the bad guy might strike first and do pre-determined damage. High high and you can roll to hit - and if you hit you flip to an entry that tells you what happened.

Thief skill resolution is odd - sometimes it seems to just work, other times it's coloring in boxes. In those cases, let me quote one:

If any number is equal to or below your open locks percentage, go to entry 19. If all numbers are greater, go to entry 20."

(And might I say the explanation is very clear and precise, and I approve.)

Interesting choice of "higher level is a better chance and more chances." That might work as a house rule - relatively low thief skills, but more rolls when you're higher level.


In the back is a "Group Play" version, with a complete map and monster stats. It's a short dungeon - All of four pages including a full-page map, half-page of monster stats, and half-page illustration. Instead of being set up to get out, it's numbers as if you were coming into the dungeon.

It also has two new monsters - the Rock or Cave Toad (a gaze-attack toad), and the Snow Ape (exactly as it says.) It has a lot of art, too, including some nice Jim Holloway art.

I took a couple of pictures so you can see what the inside looks like: 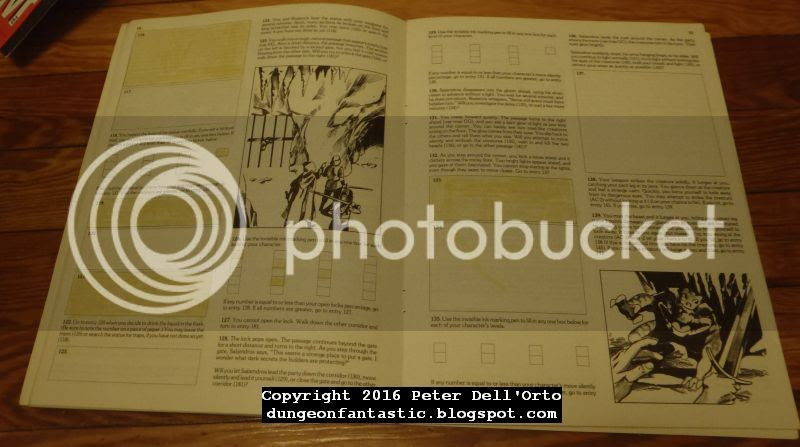 Here is one where I tried a highlighter or two to see if it would reveal. Nope. The use of the ink was kind of sad, in that respect - not only can't I use this again, but I can't even read most of what I "revealed." It hasn't held up well over the years despite sitting unused on a shelf for decades. 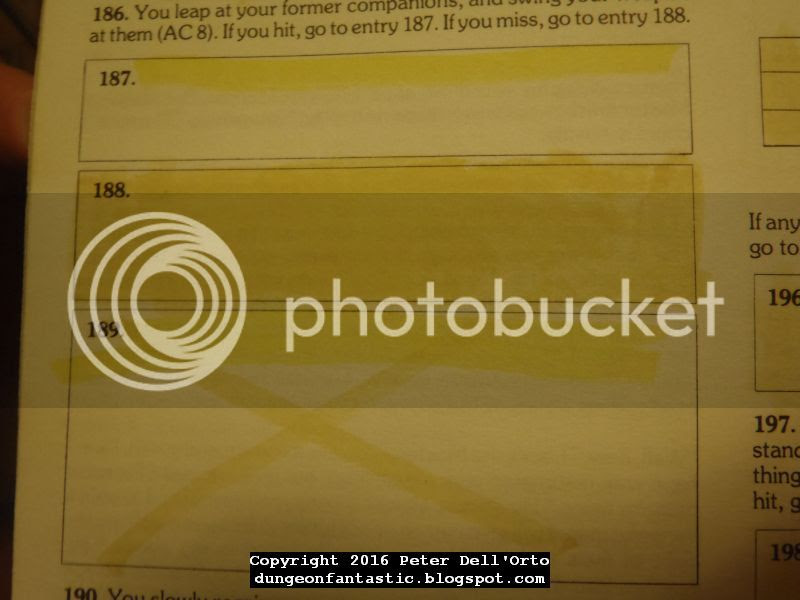 I played and enjoyed M1. I remember getting this module distinctly. It was a gift from my mom and I couldn't wait to start playing. I was very excited to have a "proper" solo adventure. I've mentioned before it was common for us kids to play our own characters through published modules on our own. Having a real tool for the job - especially where you couldn't just write down the treasure and XP and say you did it - was great. Plus, it was genuinely fun, like the first run through a choose-your-own-path style book.

I played with the pre-gen. I didn't name him, but I wrote my name clearly on the "Player Name" line. I have his level 3 stats and he's got lost HP and treasure and XP from the adventure. Looks like I played him with AD&D, since his HP are impossible for a Basic D&D thief, and his XP match AD&D's higher numbers. Actually his HP are impossible with +4 per die for HP, which I might not have understood was for fighters only. Or maybe we ignored that, like so many AD&D rules.

It's really hard to remember how it went. The boxes are almost unreadable or are just flat-out unreadable. The "magic ink" pen is gone, and the highlighter I tried many years later doesn't reveal any of the hidden writing. Too bad. I'd like to have complete, usable copies of these - seems like they would be useful and fun if the "magic writing" could be swapped for "click and reveal" in an electronic document. What kind of ink was needed to reveal the print - and if the print can even be revealed if I had the appropriate pen - is just an unknown.