Review: All In A Night's Work

Since I usually do a GURPS post on Thursdays, and I've started reviewing my solo adventures for D&D/AD&D, why not look at the first GURPS solo adventure? 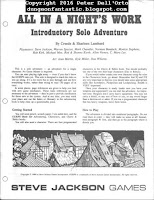 All In A Night's Work is a solo, introductory adventure for GURPS. The copy I have came with the original 1st edition boxed set, and is back-to-back with an inverted Caravan to Ein Arris. In the words of the adventure:

Like a fair amount of solo and one-on-one adventures I've seen, this is an adventure for a thief. Seems reasonable - it's easier to solo capers than have people hang around while you're on them; also, being sneaky helps when it's just you. It's also good for an introductory adventure - clear mission, low social interaction, lots of skill checks (sneaking, climbing, etc.), risk-reward decisions (push for more loot, carry extra and suffer penalties, fight or run), and low but not necessarily no combat.

The adventure is 14 pages and 175 numbered entries. Start at entry 1, make decisions and make rolls, and keep going until you eventually get to either 175 or another entry that says, "Your adventure is over." Or you die, which can happen.

Combat, skill rolls, etc. are all handled with straight-up GURPS. No coloring, no pre-determined rolls for the opposition (except for reactions - they react poorly to thieves in the house!), nothing except the normal game rules. They're often explained in short form so you can just try them and go.

It's a fun adventure with solid replay value - and nothing is so programmed and forced that you'd play it once and then skip it. It's short, solid, fun, and challenging without being too hard. It really is a good way to learn 1st-3rd edition GURPS.

All In A Night's Work was possibly my introduction to GURPS per se. Not to the system in parts - I'd played Man-to-Man a lot since it came out in 1984. But to the actual 1st edition boxed set? I played through this adventure, probably with Dai Blackthorn, the example character.*

I'm sure I played it a couple of times just to get different endings, and I know I ran someone through it to teach GURPS. As an introductory one-on-one or true solo adventure, it was excellent.

As far as I can tell, it's not out for 4th edition GURPS yet. That's too bad - it's a solid introductory adventure and it teaches you the rules. And with a skill-based system, it has replay value - just because you know the best choice is A not B doesn't mean your skills are up to doing A successfully.

And for other people's war stories, check out this post and the comments for more on All In A Night's Work.


* For what it's worth, what's with low-ST example characters in GURPS books? Man-to-Man had ST 9 John Falcon, GURPS one-upped that with ST 8 Dai Blackthorn, and my players made a whole series of ST 7 wizards. Examples can be a bad influence!
Posted by Peter D at 11:49 AM