No game this week, so it's another Felltower NPC this Sunday.

Gort was an NPC volunteer the PCs picked up early. I named him after a character in a video game that one of our players' sons was playing at that moment. When told he was in the "Shining Force," well, naturally so was this Gort. He came for tips and beer money, and because it got him out of the house on Sundays.

He was a fun GM mouthpiece, too - he might be giving you useful hints from the GM to move things along. Or he might be totally crazy and talking nonsense. It was never clear.

He was also the perfect example of the dungeon explorer. Iron spikes and iron rations. Mallet. Crowbar. Flask of Oil. Etc. He seems to have just the right thing. This isn't Gizmo, it's just he's got one of everything you'd buy off the AD&D Players Handbook equipment list. "Garlic for 2 cp? I better take some. What is Wolfsbane? Who knows, buy some." No 10' pole, because we never took those back in the day.

He's also ridiculously well-armored, as the only dwarf around when the group found some magical scale armor I'd thrown in when I stocked the dungeon expecting Borriz Borrizman would probably end up with it.

Gort is sort-of based on a template from this book:

For more pre-made henchmen from my game, check the DF Henchmen page.

Gort's loadout and gear was based on a mini someone threw in as a bonus when I bought some painted orc minis off of eBay. 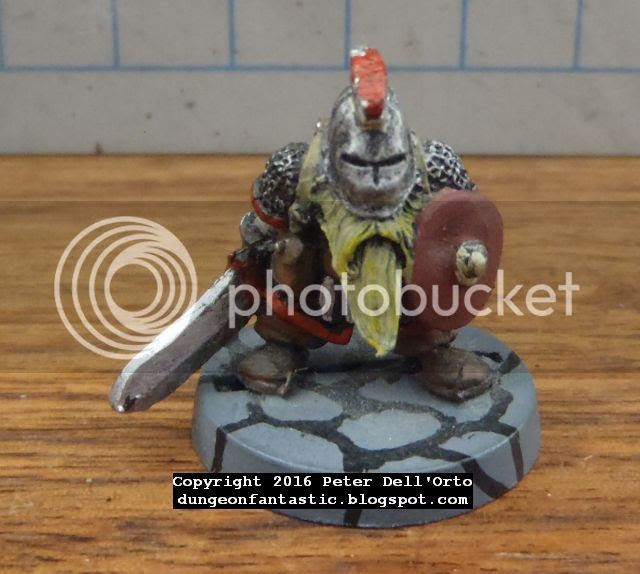 Gort of the Shining Force
76 points

Gort is a veteran adventurer, who saved worlds and Princesses alike back in his days with the Shining Force. He has a knack for knowing just the right dungeon-related facts, like the average depth of pits or where to place a spike to keep a door open or shut. This knowledge doesn't seem tied to any larger source of information besides pure experience. He still thinks he's got his old skills, and acts like it. Also, he refers to any comments about his sword or why he lacks an axe or pick as "Racist."

Quirks: Incompetence: Stealth (defaults to a 2)!)