After reviewing several solo adventures for D&D and GURPS, I decided to pull out one of my favorites: Conan the Wyrmslayer. It's for GURPS 3rd edition.

I know I said I'd get to MV1 Midnight on Dagger Alley but I'd like to play through it before I review it, which pushes it back to later in the week at the earliest. I will get to it, though. 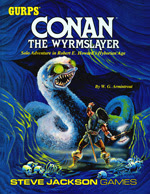 Conan the Wyrmslayer is a solo adventure for 3rd edition GURPS. All it needs is the 3rd edition Basic Set - GURPS Conan would potentially be useful for a new character but it's not necessary. It is based on the Lin Carter / L. Sprague de Camp story "The Lair of the Ice Worm."

The basic story is you're Conan or your own character, you're out in Ice Devil Pass trying to make it back to civilization, and adventure intervenes. There are beastmen to fight, a horse to try to preserve, and a girl to rescue. And an ice wyrm to fight when things go, as you pretty much hope they will, towards "danger" and away from "and nothing happened, the end."

The adventure takes place across 273 keyed entries that cover the glacial surface and some hidden ice caves.

The ice caverns are handled with a map that is generated as you go. It has a start block with (potentially) three exits, and a series of larger rooms connected by smaller possible connections organized into rows and columns. Roll the dice and they tell you what openings there are, and then what entry is in what room. It's simple enough but leads to quite a lot of wandering around looking for your goal.

It can get frustrating flipping around page after page, then rolling, then flipping, then rolling, then coming back. But it makes for a unique maze each time, and there is just enough pre-programming to ensure you'll get to the worm . . . but only after you take some risks searching the icy and not-uninhabited glacial caves. Don't take the risks and don't search around and you'll end up with nothing (including the option to just leave) but if you push you'll eventually face the main monster. It works in play, but with a lot of flipping.

The surface is handled with a battle map and rolls.

All of the results in the game are straight-up GURPS; there is no novelty change-up or fixed results. You get to make reaction rolls for the NPC woman you can save, morale checks for some foes, try to keep your horse from panicking, etc. and move them all around on the battle map. Most of the fights are one-on-one, and the big group fight is handled smoothly with a roster full of check boxes to cross off thrown weapons, dead or demoralized foes, and tally up injuries.

One nice mechanism is the use of "Plot Words." As you do (or don't do) certain things, you gain Plot Words. At certain junctures, these can provide bonuses, different effects, penalties, forced choices, and other changes. You track the words but don't know all of the effects of "DEVESTATOR" or "WARNED" or BURDEN" until they come up. It's easier (and more intriguing) than "If you did A, turn to X, if you did B, turn to Y, for all others turn to Z." That happens in a few cases, but actual in-play decisions end up with plot words not memorizing your choices.

This is a tough adventure. It's almost depressingly easy to get killed off even as a 23-year old 375 point Conan. Even with good decisions, bad die rolls can end you. On the other hand, though, there are relatively few "roll or die" situations. And it's even possible to get through the adventure saving the girl, avoiding the wyrm of the title, and just getting to safety. On the other hand, you can fall down a crevice, freeze to death, or just die in combat with any of a half-dozen different foes. And fighting the ice wyrm straight-up is winnable, but pretty risky. Good decisions, good play, and reasonable rolls can see you through. A comedy of bad rolls or terrible decisions can get the dreaded "your adventure is over." And disadvantages can force your hand - good luck playing a savvy and cautious Conan with his Impulsiveness and Overconfidence.

I must have played this a half-dozen times. I know I ran a friend through it, too. Each time I play it, even knowing the story and the adventure, I still end up with results I wasn't necessarily hoping for. Or aiming for. Once I finished the worm with sheer combat. Once like in the story. Another time I ended up pretty much wandering off and making it home without any real issues (good skills and good rolls did that.) Most of the time, it doesn't end well for my horse or my companion.

Last night I went through it - I didn't play out the whole initial combat. After three very successful turns I just assumed I'd win and moved on for the sake of finishing it out quickly. But I'd play it again given the chance, and it's a good example of a challenging but fun solo adventure. Even if you don't play GURPS, but like Conan and like solo play, it's worth checking it out.

I ran it again using 3e, but it would go smoothly with 4e. You just need to swap in the mechanics as necessary; few are so radically changed as to make a huge difference.

It's a fun adventure and I highly recommend it. Lots of multiple-playthrough value, and good material to grab for a GURPS game. Got to put a Yakhmar in my game, now.
Posted by Peter D at 11:33 AM