Since I'm taking a look at some of the solo adventures I own, and since I took a look at Conan the Wyrmslayer, here is Conan Beyond Thunder River. 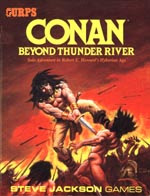 There is a lot to do in the adventure. The over-arching goal is to deal with a Pict uprising - sparked at least in part by a shaman, Zogar Sog, who is taking revenge on some men who wronged him. To deal with that uprising you have to explore the wilderness, raid the Pict camp, defend the fort, and deal with headless bodies and occult threats. You can meet two different companions. You can inspire the troops - or annoy them enough to get into a duel. You can discover spies, or not.

Like Wyrmslayer, there are Plot Words. These provide bonuses or penalties - or open or restrict options - during the adventure. You start with three randomly-selected Plot Words - three rolls, with one of three words, one of two, and one of two more.

Unlike Wyrmslayer, it also has an external clock. The game starts at 6 am on Thursday morning, and as you complete actions you are directed to roll a die to add hours to the clock. As time rolls forward, your options narrow and new choices open up. You literally don't have time to do it all . . . and problems like slow movement from wounds (or carrying companions) or poor decision making can cut down on them still further. There is a clock ticking and you're not quite sure when it'll run out (at least the first playthrough.)

Overall the adventure is dense, with a lot of choices and colorful - but clear and fun - text to read. The options generally make sense. There are a few niggling downsides - at least one entry is a dead end with rolls - fail the roll and die, succeed and realize you're going to die, go to the "fail and die" entry. Annoying. In general, though, the options make sense and are useful, even if only for information.

Like the other Conan adventures, and perhaps more than the others, sense rolls are critical. If you don't have sharp senses, you're going to miss a lot and suffer a lot. You need Stealth, too, ranged weaponry, outdoor skills, leadership, charisma, and some flat-out lucky rolls to get the best possible outcomes. Lacking some or all and you'll find yourself in difficulty. To top it all off, there are character point awards at the end - and you can compare your score to Conan's score in the story.

One thing I liked about this adventure was the variety. You can lose the Conajohara, just like Conan. You can save it. Often you can fight or run. And you can made a wide variety of decisions in most of the cases that come up. Adding in the time element so decisions really do have opportunity costs, and the Plot Words, and it has a lot of replay value.

Plus, the first time I saw it was the first time I saw a character as epic as Conan at 521 points. ST 19 and HT 17. Brawling and Broadsword each with 32 points in them. Multiple languages, and many skills - and those just the ones relevant to the adventure. Conan was awesome - good, skilled, smart, capable. And you can run him. That's critical - many games are set in the world of your hero, but generally they let you aspire to someday meet the hero. This came right out and said, "Here, Conan is awesome. You run him." I couldn't buy the book and get it home fast enough - and I remember having to look at it multiple times at the store before I had the money to get it.

Did I say 2nd edition? Yes, 2nd edition, not third. Maybe 1st - I ran it with first. The ranged weapons have PB, Inc, 1/2 DAM, and MAX for ranges, for example - he's 17 yards away, how many increments is that for this weapon and my ST? Mail is weak against impaling, not crushing. Running adds Skill/8 to Basic Speed (and Conan has a 16, for a full +2), Block is Shield/3, not Shield/2, so even Conan's Shield 16 gives him a 6 Block with Combat Reflexes. The good old, bad old days.

If you have a first edition, first printing like I do, you'll want this errata sheet from SJG. These are pretty significant ones, too - they affect the story, Conan's potential encumbrance, a map error or two, and give Conan a skill he lacks but may need in the adventure. I don't have the PDF but they generally update with all of such issues when they update the product, so only 1st printing folks like me really need to be concerned.

This is an old adventure in an older system . . . but it's a good one. It would probably be easier in 4e, if only because you're more likely to have better skills, better rolls outdoors (if you take the right talents), and better Per - but it's still going to be a fun ride. Recommended.
Posted by Peter D at 1:04 PM