All Hail Gorillicus the Great

During the resolution of downtime in my DF game, Al Murik chose to go carousing with Vryce. He picked up an extra rumor defaulting Carousing and rolling well.

The end result was that some old guy sought out Al and made him an offer. He said, "Hey, I'll trade you this piece of gold I got - I found it under Felltower almost fifty years back." He wanted 2 gp in return for that 1 gp.

He should have asked for more - I bet he'd have gotten it.

Vryce plunked down the coins and took it.

What they bought was a worn gold coin, with a ape head wearing a crown in profile on one side, and some weird writing on the back.

Gift of Letters let Dryst read it - it said, "All Hail Gorillicus the Great."

I asked Dryst's player, "Do you?"
"What?"
"Hail Gorillicus the Great?"
He declined. He probably remembers that guy who kneeled before Demogorgon when told to.

Ancient History for 1000 years told them the coin had sat for years in Stericksburg in a coin stash; before that it was in a humanoid's hoard in Felltower. Before that, it was in the palm of intelligent looking ape, and there was a flash of a sunny sky, swaying trees, and columned buildings of some design. That's all they saw.

But they still have the coin, and lots of questions.

Is this some kind of megadungeon red herring? Not a chance. I'll tell you that for nothing.


The players opined that this is the Planet of the Apes, after the apes were killed off by humans. They'll find a Statue of Ape Liberty, blown up in the sand. Either that or humans are the apes who lost their hair from the chemotherapy necessary to get rid of the radiation sickness from the ape-nuke-war.


Not the coin, but close! 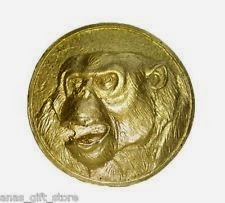