One thing I allow in my DF game is ordering custom magic items. This includes ones with the Power enchantment, which can allow for "always on" or items that cast spells that are free to maintain once cast. 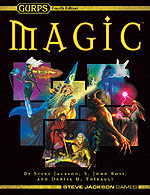 This has led to a concern. With sufficient access to defensive, buff spells in magic items usable by non-mages, powered with the Power enchantment, you can get a potentially abusive effect.

For example, Vryce has ordered a Missile Shield item with Power 2. Pricey, but once it arrives, he can put Missile Shield on himself for 3 FP, 0 to maintain.

But that's not really the issue. The problem is that he could put the same spell on another party member on a 14 or less. Another for 13 or less. Still another on a 12 or less. And so on - only a -1 for each spell on, and 0 cost to maintain, this reasonably means 5-7 PCs with Missile Shield on, for free, with no real penalty. After all, the -1 per spell accrues to someone who doesn't care, and the failures would occur in town, when it's fine to rest and cast and cast again until you succeed on all of them. Luck can take care of any Critical Failures, even if I only start the clock on regeneration of Luck at the time they enter the dungeon.

We've always ruled that magic item penalties for spells "on" accrue to multiple castings, but only on the item.

Now, I feel like DF is the place to have ridiculous abuses. But I also know my players find some ridiculous abuses to be fun-killers. After all, this is a few investments away from everyone being Missile Shielded, everyone being Invisible, everyone using Walk on Air, everyone having Haste +2 for free the whole trip, and so on. So I offered some suggestions for curbing the abuse. My players had some comebacks, which I'll also discuss below.

Idea 1) Only mages can use magic items that let you cast spells on someone other than the user. So if the party wizard has a Missile Shield bracelet, he can use it to cast on others. The knight wouldn't be able to.

Impact of change: Minor, but it also means you can't have, say, a Scout with an attack spell item.

Player reply: just means they'd give the item to the mage. Better to have magic items accrue penalties to other items or other spells used by the caster. For example, -1 for every 2 spells instead of -1, so magic items merely defray penalties instead of offloading them entirely.

Impact: Items are much more limited.

Player reply: Weakens magic items too much. Generally, I agree. Power is pricey, and if all it does is reduce one casting, there is a real limitation built in but no corresponding cost reduction. Something like this would help.

Idea 3) Luck can't re-roll spell failures. This one hasn't really come up, at least not recently, so it wouldn't undermine anyone (Dryst wants Luck to avert critical hits, he's already got a way to avoid critical failures.) But it would mean it's risky to load up a party with a bunch of items.

Impact: Medium, I think. Major when it comes up, but that'll be uncommon.

Player reply: Hoses people who want to force re-rolls on Critical Successes against them. Might work if we limited it to just not re-rolling magical item spell rolls.

One thing I decided to just do, though, is say that any Critical Failure on a magic item spell casting instantly, and automatically, cancels all spells up based on that magic item. An 18 would have even more additional bad effects, but all of them would revoke the spell effects. That would discourage pushing things.

The real question is, how much is it fun to limit magic item abuse? Of course, powerful magic items will be out there. Off-the-shelf items, though, might be worth restricting to avoid the "all buffs, all the time" issue.

Any other suggestions out there? We're just running through a bunch trying to figure out what's a the right balance of fun and abusive.
Posted by Peter D at 8:01 AM