Here are a few more of the pictures of the Purple Worms from yesterday's session, all courtesy of Tom. 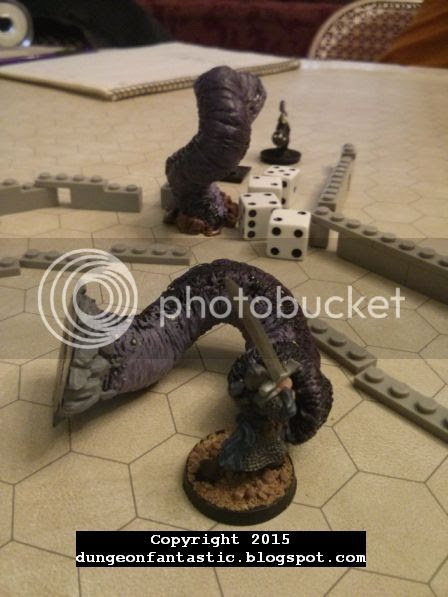 Scond attack, but before the ledge started to collapse. 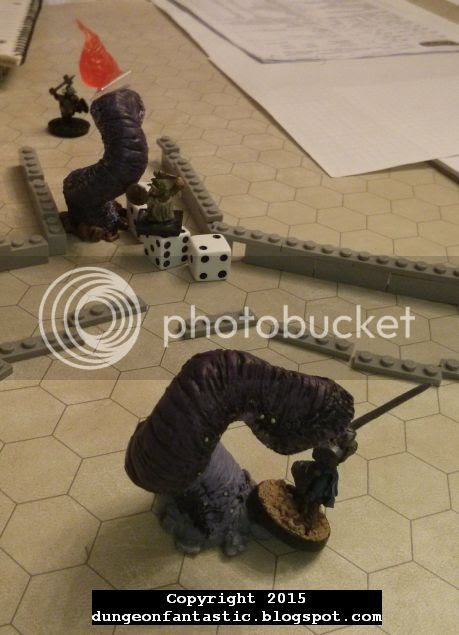 You can see we taped a Bones fire sphere to one's head as it's on fire. 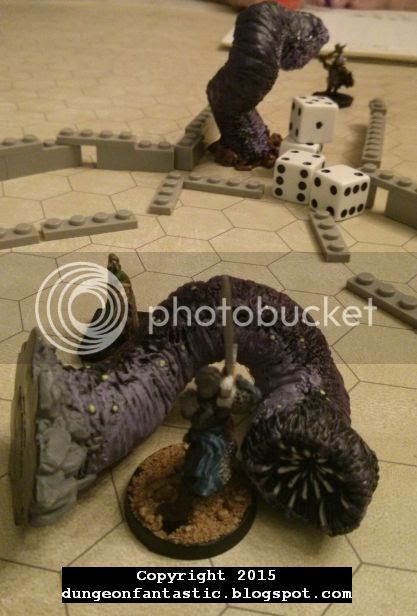 Vryce and Dryst, triumphant, but the ledge has collapsed and the second worm is still threatening Al Murik.

Click on any, as usual, to see a bigger version.

Both of these purple worms are Reaper Legendary Encounters pre-paints. I bought one at Timewarp Comics & Games on a lark, because it was pretty cheap. That was one of the things that made me say, I need to run a DF game. I bought another, later, either there or online. But I've had both for a few years, carefully packed so even an accident glance at my clear mini transport case wouldn't let you see the worms. They were a surprise except for the fact that "giant purple worms" is a D&D thing my players probably expected at some point. That I had minis ready to go? Never came up.

I statted to the mini, so the worms are SM+5, 12 yards long, about 4' diameter (and can extend their mouths to twice that), and rear up to strike like giant cobras might. They're lethal if they hit, but like all "normal" animals, they aren't really well suited to armed, armoured, and magically protected prey. Still, hit = death made for tense turns. One critical hit on a Luck-less character or a critically missed Dodge and it's time to think of what you want to run next. Swallowed characters get a free constriction attack against them and not much they can do to stop it except pray their friends kill the worm and carve them out.

I've been tempted to pick up more of these minis, especially at under $2.50 for unpainted ones (I can see these painting up fast.) But I don't need-need more, and I can get away with rows of dice if three show up again next time.